You Are Here: RWTH researched control mouse behavior with light

About 130 years ago, the Spanish anatomist Carlos Calleja y Borja-Tarrius described "islands" of nerve cells deep in the brain. However, the function of these nerve cells has remained enigmatic until today. Now, an international research team from the University of Florida, the University of Pennsylvania and RWTH Aachen University has succeeded in deciphering the function of this special brain structure for the first time. The " islands of Calleja" function as the command centre of body care. 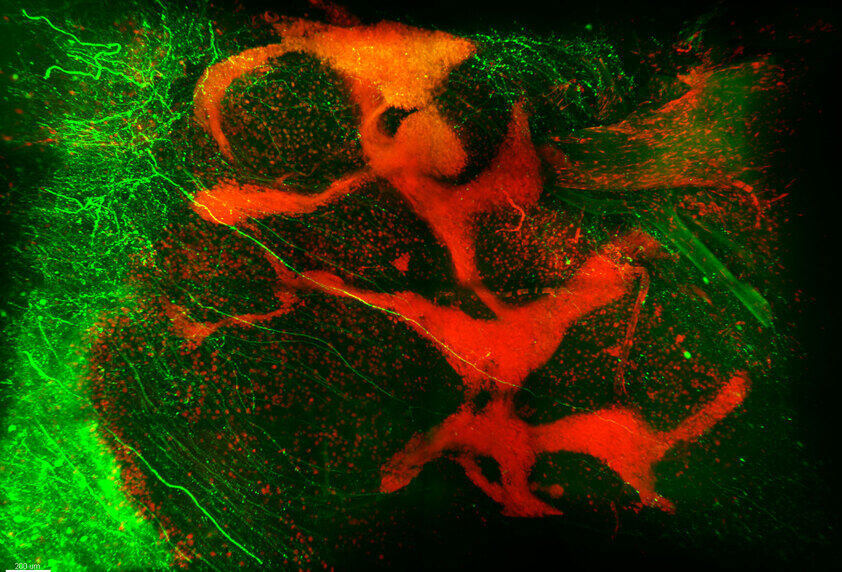 The image shows a microscopic 3D view of the granule cells in the "Calleja islets" (red) and of nerve fibres from the olfactory bulb (bulbus olfactorius; green) in the brain of a mouse made transparent by the CLARITY method.

The team has now published their research results under the title "Ventral striatal islands of Calleja neurons control grooming in mice" in the journal "Nature Neuroscience".

In the laboratory, the researchers first examine the exact location and anatomy of the "Calleja islands" in mice. Experimentally, the scientists changed the optical properties of mouse brain tissue and made it transparent. Using a special microscope, they were now able to visualize structures deep in the now transparent brain, in which only the nerve cells of the "Calleja islets" displayed bright red fluorescence. Here, the researchers made their first astonishing discovery: the supposed "islands" are in fact a large coherent structure of nerve cells, more reminiscent of deer antlers or roots. Using modern genetic methods, the scientists then introduced a light-sensitive protein into the nerve cells so that the activity of the cells could be controlled with laser light pulses. Now, whenever the nerve cells were activated in behavioural experiments, the mouse began to groom itself. With another light-controlled protein, which briefly paralyses the nerve cells, the animals’ natural grooming behaviour could in turn be stopped experimentally. Thus, it became clear that the "Calleja islands" form a control centre for body grooming.